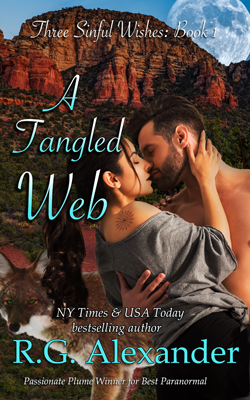 Dani ran away to Sedona to heal; her bff, Liam, at her side. Now that she’s finally ready to start her new life, safe from the dangers of her past and surrounded by new friends, she knows things will change between them. She can’t help loving him, but he deserves more than she can give. Someone without scars.

She wasn’t expecting that spider.

Liam Cane had fallen in love at first sight. Bad timing had ruined his first chance with Dani. Impossible choices and a few seemingly harmless omissions had ruined his second. He’ll have to take a risk and shake things up if he ever wants her to see him as more than just a friend and roommate.

He wasn’t expecting a mysterious stranger to offer the solution, but he’ll take it, and whatever magical assist is offered, to finally get Dani into his arms.

*Cinnamon bun chef is soft for sunshine one, roommates, friends to lovers, one magical ménage with pansexual shifter

*This book has been completely rewritten, based on a novella in the 2011 Three Sinful Wishes anthology. It has been extensively revised, edited and is significantly longer than the original version.