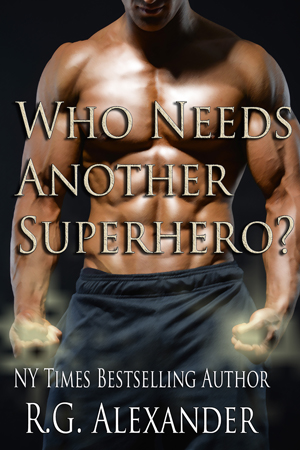 Return to Gaia City. Where there are way too many superheroes for Dayna’s peace of mind. Life as the unofficial mascot for Gaia’s Guardians hasn’t been easy for the roving reporter. So maybe she overcompensates. Takes risks she shouldn’t.

She needs to prove she can hang with the big boys. One in particular.

Stone Matthews has never regretted becoming a superhero. As Rock Hammer, he’s an invincible chick magnet who has yet to meet an obstacle he couldn’t smash or a woman he couldn’t charm. Except for his best friend’s little sister. Dayna used to be his biggest fan, but one mistake years ago changed their relationship forever. Her recklessness drives him crazy, her sharp tongue cuts deep, and her hot little body makes him want to lose control.

When she goes chasing yet another story that could be the death of her, Stone makes a decision. Since talking doesn’t work for them, he’ll use another form of communication to show her how perfect they would be together.

Rock will be too hard for her to resist.

Ms. Alexander takes us on a journey of action and adventure in the style of Indiana Jones. I’m so in love with the wonderful fantasy world of Gaia City that I can’t wait to go back. If you don’t pick up a copy of Who Needs Another Superhero? you’re missing out, but don’t short change yourself either, grab the first in this amazing series, too.