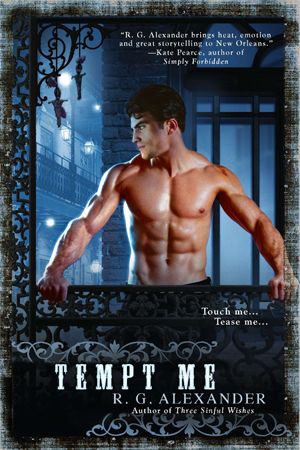 In the sultry heat of the Big Easy, desire can be a dangerous thing…

Come back to New Orleans, the Toussaints, Adairs and Rousseaus and the magic of the Big Easy for Gabriel’s mysterious return.

In the sultry heat of the Big Easy, desire can be a dangerous thing…Gabriel Toussaint Giodarno has returned to New Orleans to make amends with his estranged family. The last thing he expected was to be hounded by a magical wannabe-guardian angel-or to be tempted by a beauty who’s strictly off-limits. Angelique Rousseau has always lived a safe, uneventful life. But when her friend’s twin brother arrives, Angelique finds herself drawn to him. Neither Gabriel nor Angelique is prepared for the intensity of their joined passions, or what the voodoo spirits have in store for them…

The unfortunately familiar female voice sent Angelique and Gabriel scrambling away from each other. She cursed silently as her sluggish hands readjusted her blouse, covering her breasts.

Her jeans and the remnants of her thong were a bit more difficult of a proposition.

She looked up at Gabriel, thankful that he’d moved to stand between her and Bethany as she got to her feet and hopped herself back into her jeans. She shoved a scrap of red lace into her pocket and tried to focus on the hushed conversation going on in front of her.

Bethany sounded strained. “They noticed Angelique was gone. We told them we saw her head toward the front door, and that we thought you’d gone home.”

Angelique peered around his broad shoulders to study his face. Emotionless. Almost cold. Could he turn it off so quickly then? She’d never been that good at hiding her emotions, and right now she was a tangled mass of nerves—not to mention frustration, embarrassment and unbelievable arousal.

Bethany sent her a sympathetic glance just as her husband appeared behind her.

BD raised one elegant eyebrow as he took in the situation. He snared Angelique’s gaze, one side of his mouth quirking upward. “Yes. You are definitely my favorite Rousseau.”

Bethany dug her elbow into his ribs and he winced. “What? You didn’t marry a puritan, Blue Eyes. And it’s not as if you don’t enjoy a touch of risk now and then. I distinctly remember a certain store’s dressing roo—oomph!”

Angelique tried to hide her smile when Bethany whirled around and covered her husband’s mouth with her hand. “Public displays of affection aren’t the issue here, okay? And keep your voice down.”

Understanding dawned in BD’s amber eyes and he tugged Bethany’s hand away from his mouth, kissing it apologetically. “The players and not the game. I see. And you’re right as usual, my love. Rousseau is more the punch first, think later sort. Especially when it comes to things he can’t explain. Like me.” He smiled, lost in a memory. “But he usually comes around.”

Angelique shook her head. Yes, she might have chosen a more secluded spot, if she’d known how well and truly lost to Gabriel’s touch she’d become. But she wasn’t sorry it happened. And she wasn’t going to act like a toddler with a hand in the cookie jar. “Well, you may see it but I don’t. What I choose to do is exactly that. My choice. My brother needs to get used to that.”

She placed her hand on Gabriel’s arm and his muscles tensed. He backed away from her and ran a hand through his hair. “It isn’t about you at all, Angelique. It’s about me.”

He refused to look at her, to look at any of them, as he continued to back further away. She watched his gaze dart around the yard, peering through the shadows. “I shouldn’t be here. I have to go. Forgive me.”

She stood beside the tree and watched him disappear around one side of the rambling old mansion just as her brother and Ben appeared from the other.

Son of a bitch. What was wrong with that man? She knew it wasn’t fear of Celestin that sent him racing off into the night. No. Something else was going on.

Or are you just fooling yourself because you want him?

Maybe, she admitted silently. But she didn’t think so. She wasn’t sure how she knew, but she did. Gabriel’s responses to her had been real. The chemistry she’d been feeling between them was real. And so volatile it had overwhelmed her.

A part of Angelique was still reeling from the experience. She’d come alive for the first time in a way she could hardly explain. Her miniature obsession with the scowling bad boy had taken an unexpected turn. Now that she knew what he could do to her body with a single touch…

She just had to find out what he—what everyone was hiding from her about him. Now more than ever.

Bethany’s words fell right in line with her plan. “Babe, could you distract the boys and tell Michelle and Allegra we’ll be back in a few minutes, please? I think we need to have a girl talk.”

BD bowed quickly and winked at the women. “For you? Anything.”

He raised his voice and headed toward the two scowling men who’d reached the gazebo. “Rousseau, Ben, did I ever tell you about the time I was called to help a certain senator with a penchant for, shall we say, letting someone else have the reins?”

...an intriguing love story with steamy love scenes...a page turner. If you didn't read Possess Me, which started the voodoo series, Tempt Me will entice you to do so.

... a tantalizing and spellbinding romp into the world of magical New Orleans... it's all so well written and sexy that I literally had to stop reading and give myself an "adult" time out! ... I truly hope that Ms. Alexander continues this amazing series

I really enjoyed this book. It was a change from the normal paranormal romances, with a unique plot, and intriguing characters... The tension kept me turning the pages... Needless to say, it was a great read and I would definitely recommend this author's books to anyone