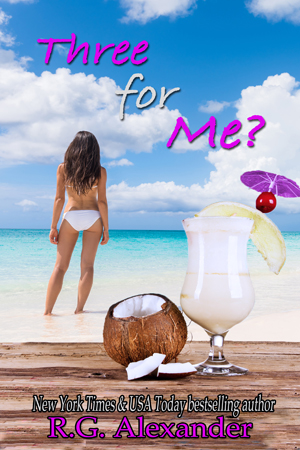 Part of the Menage and More series:
Editions:eBook - Second Edition

It’s never mattered that Charli is the only girl in the crowd.

She’s always been a tomboy, anyway. Just one of the guys.

Between work and Couch Potato Thursdays, life is pretty full. Sure, no man alive can get through the friend gauntlet, but thanks to her boys and her toys, she’s got plenty of fantasy material. It’s a win-win situation. Until Lee has a destination wedding in Cozumel—and Charli’s “best man” duties take a kinky turn.

They’re the only family she’s ever known. She can’t imagine living without them. Will she have to choose? Or will the final score be three to one?

Warning: Naughty costumes, kinky toys, a boy, a girl…two more boys, all doing unspeakably dirty things to each other.

Charli was going to kill Lee. Shouldn’t he be in his honeymoon suite, doing insanely kinky things with his new brides? Instead, he and the other guys had disappeared, leaving her alone with Lori Ann and Connie. They’d talked her into a little sun bathing by the pool. And apparently, her faded blue one-piece wasn’t allowed to the party.

“Oh relax, Charli. Just lay back, enjoy our complimentary wedding margaritas and tell us all about Lee when he was a randy teen.” Connie’s laughter was infectious, and soon enough, whether it was from the alcohol or the company, Charli found herself relaxing. And sharing stories.

“You-you mean he actually thought his—? That it was—?”

“I swear. And he was too afraid the doctor would tell his mother, so Simon and I had to drive him to the next town while Eric and Raf covered for him with that ridiculous fish story."

Lori Ann spurted out her margarita, and the three girls wailed in renewed humor as they toweled her off. “You’d think that thing was made of gold the way men go on about it.”

Connie’s smile was sly. “Well, Lee’s is certainly worth its weight in gold. The things he can do…mmmmmm.”

”Lalalala. TMI, people. Friend and business partner over here. I don’t need to know anything about what he can do with any of his bits and pieces.”

Lori Ann tilted her head at Charli. “Come on, girl. What are you, made of stone? You’ve been surrounded by four of the finest men on the planet. When Lee first introduced me to your group I almost climaxed before dessert. And you not only work with Simon, but you spend most of your free time connected to all three at the hip. Tell me you haven’t fantasized about one or more of them in all the time you’ve known them, and I’ll tell you I have some ex-girlfriends you might be interested in.”

Charli choked on her drink. It was hard to get used to female gossip. She’d never been good at it. The curse of being a tomboy. Give her a fishing rod or a mountain to climb, but please God, save her from the conversations in the ladies’ room.

“Of course I know they’re gorgeous. I’m the one all their wannabe girlfriends chum up to in order to get me to put in a good word. But we’ve been friends forever. And some things are more important than my sex life, or lack thereof.”

Connie frowned. “See, that’s what I don’t get. You’re every man’s wet dream. You love football, you have the body of a pole dancer, no offense, and you co-own a chain of fantastically popular sporting-goods stores. How are you still single?”

Charli snorted. “Ever had older brothers?” Both girls shook their heads. “Well I have four. Four very overprotective, irritating, but good-intentioned brothers. To be fair, Lee’s never really jumped on that bandwagon. But there hasn’t been a man yet who can get through the tests.”

She nodded. “They have a system. Eric goes for the brains. He grills them, tests them, tries to trip them up. If they get through a conversation with him, Raf takes over. He’s so over the top, you never know if he’s going to humiliate them or hit on them, or both. If the man is determined enough to survive that encounter, the heavy hitter is called in.”

Connie placed the back of her hand on her forehead, pretending to swoon. “Simon. That is one tall, dark and handsome hunk of man.”

Charli rolled her eyes, though she secretly agreed. “Yeah, he’s a legend in his own mind. Mr. Universe scares the pants out of any suitors left standing and, poof, no sex life for Charli.”

Lori Ann shook her head as if to clear it from its margarita fog. “So wait a second. You’re saying that your quote, unquote friends scare all your dates away? That would seriously piss me off. Why do you let them anywhere near a prospective boyfriend? Sounds like your safest bet would be to avoid introducing them altogether.”

“I could never do that.” Charli’s tone was adamant. “I mean, it drives me crazy, but on the other hand, why would I want someone who can’t handle the guys? They’re my best friends. Simon, Eric, Raf are my family. Lee too. Hands down, I’d choose them every time.”

Connie held up her hand. “I may be drunk and giddy with newly married bliss, but I have a theory.” She weaved a bit in her lounger before pointing at Charli. “You love them.”

“Of course I love them.”

Lori Ann shook her head. “Not even a little related. I’m a nurse, I know these things. And love them or not, you definitely want them. All three of them.”

This was ridiculous. “Three? If we’re being delusional why not add Lee to my fantasy list?”

“You don’t want Lee. Trust me, we’d have been able to tell. No, with him you’re right. You love him like a brother, and he feels the same about you. But it’s more than obvious that the rest of you have…tension.”

Charli was squirming in her chair. Men were so much simpler. They didn’t pick up subtle hints, or notice things you didn’t want them to notice. Not usually. And if they did they were too much of a guy to bother you by mentioning it. “Tension?”

Connie fanned herself. “Oh yeah. If you could only see the looks you get when your back is turned. Lava hot, girlfriend.”

“They all do, Charli. Simon, Eric, Rafael. As far as they’re concerned there are no other women when you’re around. Much to the chagrin of the female population of Denver.”

“See? Now I know you’re lying. They’ve brought dates to our get-togethers. I’ve seen them pick up girls in bars. Hell, we have each other’s house keys, and let me tell you, from the amount of women and men I’ve seen passing through the revolving doors they call bedrooms, none of them are suffering.”

Lori Ann popped a strawberry into her mouth, chewing and swallowing before she spoke. “Have you seen any of that recently? Cause we’ve been with Lee now for about two years, and the only woman we’ve seen them with, apart from us, is you. Rafael, for all his bluster, hasn’t brought anyone around either. Think about it.”

She thought about it. They were right. The guys hadn’t brought many dates around recently. And Lord knew they hadn’t let a man within ten feet of her. Maybe they were just burnt out on dating. Maybe they’d gotten into a rut. Who knew? Whatever the case, the girls were wrong. It had nothing to do with her.

I knew R.G. Alexander's stories burned up the pages, but this one melts the ice cubes.

This may have been my first R. G. Alexander book, but it will certainly not be my last.

This is a great sexual fantasy tale. Three gorgeous men plus one frustrated female equals smoldering sex scenes! I love the imagination used to bring them all together (wink wink).

Three for Me? is definitely not for the sexually repressed! It's well written, fast paced, and full of kinky fun.