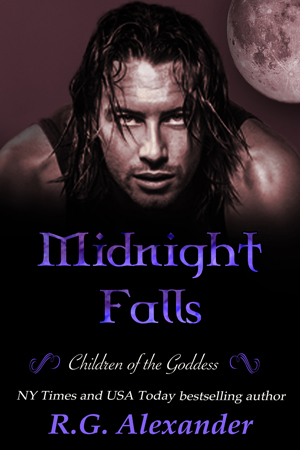 In Book 4 of the Children of the Goddess series, questions are answered, and more mysteries are revealed. The only way any of the clans can have a future, is to find the one man who can’t remember his past.

Midnight Falls is the fourth book in the Children of the Goddess series and once again, I am impressed with R. G. Alexander's storytelling ability.

She delivers a satisfying conclusion with a huge "Bang" and I, for one, was crying by the time the last page ended. MIDNIGHT FALLS is a wonderful ending to this four book series and I am hoping Ms. Alexander comes back for a visit for I would love to see what happens to the next generation of the Children of the Goddess. If you haven't read any of these stories and love a different were-shifter, vampire story, then grab the Children of the Goddess series and settle in for one wonderful journey.

The fourth installment of R.G. Alexander's CHILDREN OF THE GODDESS series,MIDNIGHT FALLS, is a steamy and action-filled conclusion to an outstanding world that I will miss visiting. Ms. Alexander has a way of charming her audiences with a creativity and uniqueness all her own. The darkness and light she displays and the range of emotions she brings forth is a perfect compliment to the level of eroticism she introduces.This whole series has been a delight to read and I highly recommend it.