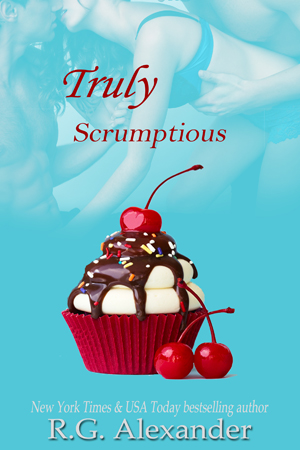 Part of the Menage and More series:
Editions:eBook - Second Edition

The popular cooking show, Brunch with Laura, is T.S. Larkin’s brainchild. Rather, it was. Because her boss couldn’t keep it in his pants, Truly’s unemployed and not sure what to do with herself. When a juicy tip leads her to the best-kept secret in Denver—three mouthwatering chefs whose restaurant image needs a makeover—her PR instincts start tingling. And her imagination simmers with private fantasies.

Ever since the last woman he, Clay and Louis shared nearly ruined everything, Nate has worked hard to get things back in order. Truly’s ideas could rescue their business, but her non-stop curves, luscious lips and cherry-on-top hair are a sure-fire recipe for another disaster.

But when the ingredients are right, the reaction is inevitable. A kiss in the walk-in explodes into a wild night of indulging Truly’s every sweet and spicy whim. She is the missing ingredient for the perfect foursome. Except Nate is suddenly not so sure he’s willing to let the others lick the spoon, much less share.

Three chefs. Three gorgeous, mouth-watering men, two of them looking at her with interest. Not only were her PR senses tingling, but her body was as well. Her skin grew heated, and the cloth of her pants suddenly felt rough against her thighs. Constricting.

Nate brought her back to reality with a roll of his eyes. “Down, boys. Ignore them, Ms. Larkin. The fumes from the kitchen have long since gone to their heads.” He turned to Robert, sounding impatient. “What brings you here, Bob?”

“Destiny.” Robert beamed. “You three have a PR problem, and don’t deny it. You are some of the best chefs in your field, with the most interesting story, and let’s face it—the most sex appeal.” Truly silently agreed with that last part, but Robert wasn’t done. “This place should be packed to the rafters, people should be coming from all over the state to sample your culinary masterpieces.” He looked around. “Instead it’s the lunch hour, and we’re still the only customers in here.”

“Not that slow.” The blond Louis grimaced ruefully. “He’s right, Nate, and you know it. And not only about our massive sex appeal.” He gave a wink to Truly. “You’re the one who’s always grumbling about the overhead. The Lord only knows we could use a paycheck every once in a while. I’d like to be able to afford to eat what I’m cooking, if ya know what I mean.”

Clay nodded in agreement, and Truly began to get that feeling. That burst of adrenaline that shot up her spine. An ‘aha’ moment of mammoth proportions. She suddenly understood why Robert had hidden this place away. Why he’d brought her here.They were her second chance. She could make these men famous. Make The Iron Horse a household name. They’d be bigger than Brunch with Laura. It would turn Clive into a big pile of pervy jealousy.

Robert saw her expression and slid an arm around her shoulders, squeezing affectionately. “I’ve brought the solution to all your problems. I’m not too shabby, but TS is the best. She’ll know just what to do to get you the exposure you need. She has all the contacts. All you have to do is put yourself in her capable hands, do exactly what she tells you to, and in two months time you’ll have more business than you know what to do with.”

Louis stepped closer to Truly, tilting his head coyly. “You don’t have to twist my arm. I’d be glad to put myself in her hands.”

Truly’s eyes widened. Why did that sound so tempting? She’d thought Clive’s continuous lewdness had turned her off the male species for life. She supposed her damp panties had something to do with it. Clive made her sick. Louis made her hot.

Business, Truly. This is business. Although she had to remind herself to give Robert a serious tongue lashing for limiting them to a two month deadline. “I appreciate that, Mr. Dumont. And I agree with Robert. Artists shouldn’t have to suffer for their art. And when they have the whole package? Well, the last thing they should do is hide it. I can help you. We can help you. If you’ll give us the chance.”

Nate crossed his arms, drawing her attention. “I’m not saying we need any help. In fact, if you’re thinking of turning The Iron Horse into some fancy black tie establishment, then we definitely aren’t interested. But even if we were, don’t you have a job? How would the television station feel about you doing freelance?”

The suspicion in his dark gaze made her shift uncomfortably. Rule number one: when interviewing for a new job, don’t let your potential employer know that your last employer fired you. No matter what the reason.

Obviously Robert hadn’t gotten the memo. “Her boss, Clive Garret, tried to put the moves on—”

Truly interrupted him with a glare. “Robert and I are currently free agents. You would be our first clients, but that means you’d get all our time, attention and not insignificant experience.” She pulled out a business card. “Most restaurants fail within the first three years because of bad marketing, bad food, bad location, etc. Your food is fantastic. Your faces alone would sell the place—but your marketing stinks. Talk it over, and get back to me if you’re interested.”

She handed Louis her card and turned to go. “Pay the men for a lovely meal, Robert. We have a lot to do.”

She’d reached the door when she felt a warm, rough hand grip her elbow. Nate. At his touch, electric desire crackled through her body like a living thing. Who knew her elbow was an erogenous zone? And what the hell was going on with her libido?

His expression was impossible to read, but she could have sworn she saw an answering spark in his eyes. Did he feel it too? The conflicting desire to hit or kiss? How could she be so attracted to such a grumpy, sullen man?

“Lunch is on us, Ms. Larkin.” He opened the door. “So you don’t feel your time was entirely wasted.”

Hitting. She definitely felt like hitting him. His tone told her in no uncertain terms that she wouldn’t be hearing from them anytime soon. Damn Robert. Usually he read people better.

She forced a smile. “I never waste my time, Mr. Grange. And I never let anyone else waste it either.”

A thrill of elation followed her out the door, latching on to the small victory of having the last word. Her one success of the day. At least she’d had a good meal. A great one. She could really do wonders with those three. With the restaurant.

If only Nathaniel Grange wasn’t such an ass.

Ms. Alexander creates fun, funny, emotionally-complex characters. I laughed, I wanted to beat some of the characters over the head, I nearly, almost, but didn't quite cry, and I really love that Ms. Alexander was able to evoke that kind of emotion from me in such a short book

Truly Scrumptious is a delectable tale that makes it a sumptuous keeper. With flames scorching the pages, you can't put the book down. I really enjoyed the clash of personalities between Nate and Truly, they light up the pages leaving the readers wanting more.