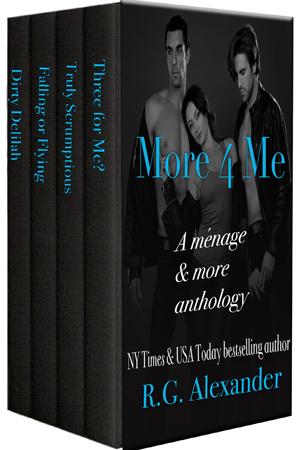 Part of the Menage and More series:

It’s never mattered that Charli is the only girl in the crowd. She’s always been a tomboy, anyway. Just one of the guys, until a destination wedding in Cozumel, where Charli’s “best man” duties take a kinky turn.

When she finds herself on a decidedly decadent shore excursion, it becomes clearer with each sexy challenge that down deep she desires not one, not two, but all three of her remaining single buddies.

They’re the only family she’s ever known. She can’t imagine living without them. Will she have to choose? Or will the final score be three to one?

Warning: Naughty costumes, kinky toys, a boy, a girl…two more boys, all doing unspeakably dirty things to each other.

Scrumptious as a cherry peach parfait…or a sinfully kinky foursome.

When a juicy tip leads the newly unemployed T.S. Larkin to the best-kept secret in Denver—three mouthwatering chefs whose restaurant image needs a makeover—her PR instincts start tingling and her imagination simmers with one delicious fantasy after another.

Nate, Clay and Louis need Truly’s ideas to rescue their business, but her non-stop curves, luscious lips and cherry-on-top hair are a sure-fire recipe for disaster.

A kiss in the walk-in explodes into a wild night of indulging Truly’s every sweet and spicy whim. She is the missing ingredient for the perfect foursome. Except Nate is suddenly not so sure he’s willing to let the others lick the spoon, much less share.

From the Invitation to Eden multi-author series

Joely knows the island of Eden and its moods better than most. A pilot for its exclusive clientele and the eyes and ears of Eden’s reclusive Master, she’s finally found a place where she truly belongs. Though kink is as common as coconuts in Eden, she’s not about to risk her position—or her heart—by indulging with the VIPs.

Austin Wright’s first invitation to the island was meant to mend his spirit after an accident that changed his life, but each time he’s returned, his desire for the pilot of his dreams has gone unfulfilled. Not this time. Austin’s carefully laid plan for learning her secrets and capturing her heart has already been set in motion. His friend Court’s arrival on Joely’s plane however is unexpected…and so is everything that happens next.

Eden has a way of making plans—and routine flights—veer wildly off course, and when Joely and Austin find themselves marooned with the wicked Court and his good intentions, it’ll take a sexy shove, a leap of faith, and a little island magic to bring love home.

Caught between an old crush and a new attraction is exactly where she wants to be.

Delilah Dean has come a long way from the grease-covered tomboy who worked at her family’s motorcycle shop. The last thing the successful businesswoman wants is a trip back to Northern California to face Asa Wilder, the sexy, tattooed bad boy who crushed her naïve fantasies, and Sebastian Kosta, an engineer with a killer body and a passion for speed. But business comes first.

When the two men stop competing for the shop and start vying for Delilah’s body—and her heart—negotiations get hot and heavy fast enough to make her head spin. But can she trust that she’s the prize they’re fighting for?

Finding out will be one wild, dirty ride.