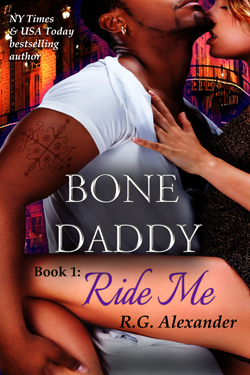 Revised and Extended Version of the 1st story in the Bone Daddy series!

In the Big Easy, there’s a legend women long for.  A voodoo spirit who can fulfill their darkest desires…

Allegra Jarod moved to New Orleans after her accident, determined to reconnect with her best friend while healing from her wounds. She wasn’t expecting to lose her heart to the troubled café owner, Rousseau. Now that she has, she’s determined to unravel his mysterious secret.

...Three novellas wrapped around the legend of a voodoo spirit who can fulfill every darkest fantasy...these dovetailing stories are fun, hot and romantic.

couldn't put this book down. It was wonderful to read something so delightfully different and deliciously magical. Sensual, seductive and filled with sexy- if you like paranormal erotica this book's for you.

Possess Me is a hot and sexy read that took me to places I didn't know I wanted to go...I Joyfully Recommend that everyone read Possess Me so they can see the magic of these beautiful stories.

POSSESS ME by brilliant author R.G. Alexander takes you on a sultry trip, laced with mystical and otherworldly touches through the heart of New Orleans. I've long been a fan... I was not disappointed in the least. Alexander brings her brilliant story-telling and her knack for the wickedly sexy to the table