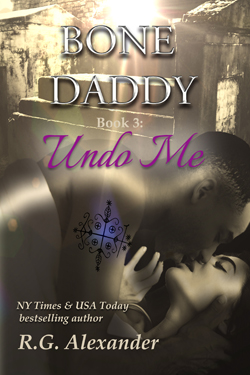 Revised and Extended Version of the 3rd story in the Bone Daddy series!

The only thing that could tempt Bethany to leave her safe, solitary existence for a visit to New Orleans was a special request from her old friend, Michelle.

Unfortunately, the old mansion she’s staying in holds more than antique journals and trinkets from the past. Between wedding chaos, voodoo lore and a ghost that won’t stop following her around, Bethany has a lot on her plate. And she hasn’t even told anyone about her dreams.

Waking up naked in a graveyard changes a man. Especially in Bone Daddy’s case, since All Saint’s is the only day he gets to experience life as an ordinary human before he’s condemned to eternity on the other side.

If he’d made a bucket list, it wouldn’t have included falling for a smart-mouthed New Yorker with beautiful eyes and a heart that calls out to his own, reminding him of another love. Another lifetime. The one he’s not supposed to remember.

Warning: Explicit m/f sex, voodoo, past lives, present kinks and a wedding. Also Bone Daddy, literally in the flesh so...