Element: Water—Fluid in battle. Cold as ice.  Mysterious as the sea past Theorrey’s End. What the soul needs to thrive.

Distinctive features: As stunning as she is deadly. Prefers trousers and the color black. Always wears a choker with a flower to remind her where she came from…and to hide the scars. Rarely without her sword…never without a weapon.

Bio: Captain of The Deviant, one of only two airships in all of Theorrey, Captain Amaranthe is ruled by no man. Her first mate, Freeman, is the only one she truly trusts with her ship and her secrets. She owes him, as well as Queen Idony, her life.

Members of her crew vary, as those who don’t know how to keep their mouths shut and do as they’re told rarely live long. Her unique sword is a special weapon crafted with theorrite that can slice through bone as easily as butter.

Her past is shrouded in mystery, but she will have to face it to help find and rescue her queen.

aka Phina Fleet or Lightfoot

Distinctive Features: As a member of the Felidae species, she has markings along her spine, arms and legs, slightly elongated ears, and a very useful tail. She has brilliantly colored red hair and emerald eyes. That, along with the seductive, almost defiant way she dresses, make her ability at skulking and thievery all the more exceptional. Her weapons of choice are her whip and a bracelet decorated with poison darts…in a pinch, she’ll just use her claws.

Crimes against the Theorrean Raj: Too many to name.

Bio: Growing up in the Felidae settlement outside of Center City was harder than she would ever admit. So hard Phina would not have survived if Queen Idony had not intervened. She would do anything for her, and for Seraphina, anything means…anything.

As a Felidae, she is agile, magnetic and irresistible—and she uses all of those skills on Captain Amaranthe’s Deviant, and Bodhan’s Siren. Lusty and proud, she has never met a man she could not seduce, a vice she did not revel in or a dare she could resist, and she’s never had a regret…until now. She blames herself for the queen’s misfortune, the kidnapping of The Queen’s Sword, Cyrus, and her sister Nephi’s fate.

Backed into a corner, Phina is more dangerous than ever before.

Element: Air—Logic and invention. Wit and fancy. Creation and chaos. The essence of life.

Distinctive Features: Golden hair, usually tousled. Beautiful features, often smudged with the sooty remnants of one of her explosive inventions. Her latest project involves changing the chemical makeup of her theorrite arsenal…Think pink.

Bio: Aurora Steele was born into a family of scholars. A high caste that came with many privileges, but no freedoms. Queen Idony gave her the chance to escape an unthinkable future in a gilded prison.

Aurora is now free to live the life she always dreamed of. Free to create and refine inventions that could save all of Theorrey. Free to work with a man whose mind rivals her own—though she’s never met him—and refit an actual airship—though she’s never flown.

Minor details she is determined to overcome.

Distinctive Features: With the indigo hair of the Wode and the petite stature of an average woman, Dare is instantly seen by all as a half-breed. A product of violence and an object of ridicule and revenge. She is neither. Trained as a shield guard her entire life, she also has the uncanny ability to know what other people are feeling. An ability very few are aware of that is incredibly useful in battle…and other situations. Underestimating her would be foolish, yet she is always underestimated.

Crimes against the Theorrean Raj: Desertion.

Bio: Dare is The Queen’s Chalice, her companion guard. Growing up in the Copper Palace with the rest of the world far below is a blessing to her, since she is inundated with other’s emotions in crowds. On Queen’s Hill you want for nothing, and it always bewildered her that Idony seemed so sad. She only knew it was her duty to keep the queen safe.

As the Senedal she has never been far away from the ever young monarch, yet she will soon realize how little she knows about her charge…about her destiny…about everything. 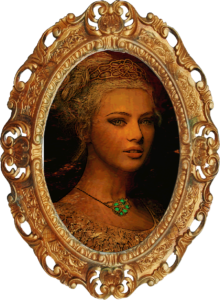 Queen Idony the Ever Young

Name Meaning: To Love Again. Goddess of spring and immortality.

Bio: She is the true heart of Theorrey. Without her, everything would be lost.