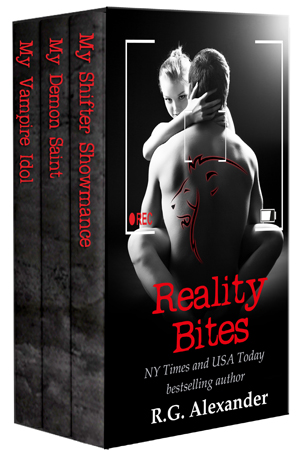 Part of the Shifting Reality series:

A Shifter, A Vampire and A Demon walk into a bar…

Or should it read…a bored shifter, a stick in the mud vampire, and a half-demon gamer share an apartment. A combination bound to cause trouble. Especially when the cat decides he wants to play.

Thomas Lyons is your average cat shifter. Cool, seductive…and bored out of his mind. With the new popularity of all things paranormal, he doesn’t see why he should hide anymore. When his half-demon technophile roommate hooks him up with a computer, Thomas starts a blog announcing to the world who and what he is. Oddly enough, the more he shares, the less he’s believed. In fact, people begin thinking it’s a new online series with fantastic effects.

Margo Sheffield doesn’t dance on tables anymore, not since her reckless naïveté cost her so much. These days, her only guilty pleasures are dark chocolate, shoes—and a certain website with a man whose purring voice sends shivers down her spine.

When the show, Shifting Reality, offers a week in a haunted Scottish castle with the stars, it seems a far-off dream. But when that dream becomes reality, her boss’s insistence that she mix business with pleasure—or else—is more like a nightmare.

Thomas’s focus on the show is blown by the luscious, camera-shy handful. And Margo can barely think about contracts when she’s surrounded by newlywed ghost hunters, a matchmaking demon and a man whose addictive touch makes her head spin. A showmance is the last thing she needs, but with a sexy cat like Thomas on the prowl…she just can’t resist.

Mac is dead, grumpy and sick of social media. The vampire thought a couple of roommates would help distract him from an eternity of boredom. Instead, they created Shifting Reality, became an overnight sensation and managed to get Mac into serious trouble with his own kind.

Rose is a half-demon bounty hunter with five evil sisters and one last job standing between her and freedom. But the instant she hears Mac sing and gets a look at the brooding ginger hunk, turning him in suddenly seems less important than getting her own private taste of him. Too bad her sisters don’t agree.

Excerpt from My Shifter Showmance

Thomas hopped over the back of the couch, his agile body moving in a way no human’s could. He landed to sit comfortably, legs crossed on the coffee table as he popped a potato chip into his mouth. “Don’t get your kilt in a twist, Mac, you agreed to this, remember?”

The tall Scotsman snarled as he paced the living room. “I believe you mentioned something about freedom in the anonymity of the Internet. That we’d be lost in the masses, and there would be no true repercussions for baring our proverbial souls.” He stopped to glare at Thomas. “People are following me whenever I show myself, Lyons. Other vampires are split into two camps. They either want to be on the show, or they are planning my demise for allowing you to continue to out us. That sounds like repercussions to me.”

“They’re called fans, Mac Attack. It isn’t like they’re carrying torches and pitchforks.” Thomas chuckled. “Not yet anyway. As for the vampire threats, you can take them. You’re the toughest bloodsucker I know.”

Saint spoke up from his position on the leather recliner without lifting his gaze from his laptop. “The forums are already lighting up like Christmas trees, and the contest post is going viral.”

Mac crossed his arms. “Only if you remember our deal. After I allow you to turn my home into your own private testing ground, this ends. No more waking to find a camera attached to my headboard. No more deep in depth interviews about the taste of Type A versus Type O positive. I have lived a dozen lifetimes with no more than a family painting to prove my existence. And now I’ve been recorded sleeping merely to answer a random question on your damn site about whether or not a vampire snores. So no more invasions of my privacy, or Saint’s, or you’ll be looking for a new roommate…and we all know who keeps this place in cream and caviar.”

Thomas watched Mac storm out to the balcony and disappear into the night, becoming the mist. He was always envious of that ability. Arrogant bastard. Problem was, Mac was right. He stared at the ceiling morosely. It had gotten out of hand. He’d never imagined people would actually pay attention to one small website among so many. Or that he’d enjoy it this much.

He wasn’t sure when it began to bother him, hiding what he was. Maybe it always had. His was a proud species. Cats weren’t known for their humility, after all. He didn’t want to dominate humans, but pretending to be one of them, pretending he wasn’t stronger, faster, more agile and a hell of a lot longer lived…well that sucked.

Clark Kent he wasn’t. The alter ego, play-acting routine had long grown stale. But he’d lived with it for so long. Swallowed the bitter taste in his mouth and suffered in silence. Until that one night. He recalled it with great clarity. He’d been penned up for too long, and he felt the desire to unleash his lion for a late night run. He’d shifted back to his human form in an alley behind his favorite nightclub. He was feeling wild, longing for the sexual release the beast within him craved. Before he could enter the club he heard the scream. A young woman had seen him, watched his body morph, watched his fur disappear and clothing come from out of the ether to cover him.

He’d reacted instinctively. Done what he’d done a thousand times before. He’d pulled her into his arms, swamped her with his pheromones, then found her friends and convinced them she was drunk. When she’d rambled on and on about seeing a lion in the alley, about her sudden need to have sex, they’d all chuckled, joking with her about her inability to hold her liquor before they decided to take her home. It was a scenario Thomas had played out before, but this time…it had gotten to him.

He started thinking about the injustice of it all. Why couldn’t he shift when he wanted to? Why did Mac have to change locations, “die” and leave his inheritance to himself over and over again? And Saint. Well, Saint was different. He had no desire to leave the house or his computer to explore the world outside. He said the demon half of him didn’t play well with others. At least, not in person. But what about all the other shifters and vampires out there? What about the ghosts? They accepted humans and their right to exist, why couldn’t they live out in the open as well?

He’d gotten home that night railing at the Fates, going on an on until Saint had walked out of the room and brought him one of his extra computers. He’d shown him how to use the webcam and how to start a blog. Mainly, Thomas now believed, to get him to shut up.

It was like catnip. He’d begun to talk into the camera and, like a sinner at confession, it had all poured out. All his frustrations, what he was, everything. It had been cathartic. Freeing. Addictive. When people began to comment on his blog, discussing his video posts in the chat room, going with what they considered his fantasy…well, he enjoyed that too. Here he could talk to them, answer questions, get into arguments about myth versus reality. Here he could be himself.

And he’d loved the loyal posters and chat room groupies. He found himself prowling less, staying home just to talk to them. Doing things he wouldn’t normally do, like risking the wrath of his roommates just to please them. Fanglvr353 had been the one to request a camera placed on the sleeping Mac’s headboard. She’d been so grateful she’d sent him virtual flowers. And a picture of herself that made even Thomas blush. It was for Mac, but somehow Thomas didn’t think he’d be appreciative.

Thomas glanced over at Saint, suddenly alert. “She?”

Saint raised one dark eyebrow. “Kittysnapdragon. Isn’t she your favorite?”

He tried not to let his excitement show. What had she thought of his last video? Had she gotten his not so subtle message to her? Had she entered the contest? He rolled his eyes at Saint. “She’s just a fan of the website, man. Besides, you told me yourself how these things work. She could be a sixty-five-year-old, three hundred pound man for all I know.”

Saint shook his head. “Nope. More like thirty-one, female, long, dark brown hair and an ass you could bounce quarters off for fun.”

Thomas made an effort to stop growling, pulling his lips down over his extending incisors. “It isn’t nice to pry, Saint.” He kept forgetting Saint’s talent. A technophile, Saint traveled through the ether with his mind alone. In a heartbeat he could know everything about anyone linked in. A power Thomas wouldn’t mind borrowing from time to time.