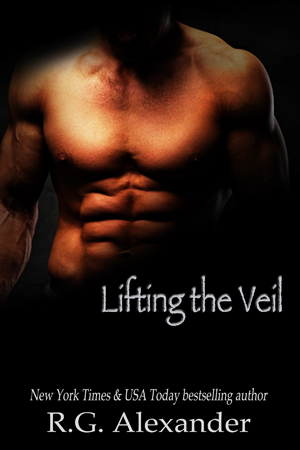 She grinned foolishly into her drink. If only the department heads at the university could see what she’d seen today. Honestly, she didn’t think anything, no matter how strange or mysterious, could surprise her after this.

Except, of course, whether or not her overly endowed body was going to stay in this travesty of a dress her aunt had squeezed her into. She attempted to tug the front up to a decent level, uncomfortably aware of how much skin she’d been revealing to the crowded bar. All she managed to accomplish was a whole lot of jiggling flesh and no new coverage.

She was tempted to try again when a heartfelt, decidedly tortured male groan froze her fingers mid motion.Three of the sexiest men she’d ever seen were standing beside her table.

Meru, you are the queen of understatement, the voice inside her head let out a low, rather vulgar wolf whistle. Before she got the chance to speak, let alone find the owner of the husky sound that had caught her attention, Sheridan appeared, her partner Kyle in tow.

“Finally,” she said in an annoyed tone to the tense-looking men beside her. “Meru, these are the guys I was telling you about. From the firehouse?”

Then she looked at them and hesitated. The largest, and sexiest of the lot in Meru’s opinion, took a quick step forward. Sheridan nodded in apparent approval and turned back to Meru.

“This is Bob.” Her cousin couldn’t have looked more pleased with herself.

Meru’s eyes widened in surprise. “He doesn’t look like a Bob.”

Sheridan let out a put-upon sigh. “What do you mean he doesn’t look like a Bob? He is, okay? He is a Bob. And these are his friends…” She seemed to be struggling to remember the names of everyone, but they beat her to the punch.

“My name is Finn,” The obvious charmer of the group smiled gently into her eyes. “This is Val. You’ve already met our man, Bob.” He chuckled at the black glare he received from his giant friend in response.

“And you, my dear,” he continued, “are the rightfully praised cousin Meru. You have a beautiful singing voice, by the way.” She nodded her thanks as she stared at him suspiciously.

Meru tried not to “look” at them, she just couldn’t help it. A sigh of relief escaped when she realized that none of them were Lizards. Oddly, she felt no fear, only fascination. Maybe it was that pep talk she’d had with Lily. Or maybe it was the sheer sexual pheromones they all seemed to be emitting with each breath.

Whatever the case, Meru sensed that none of these “men” were a danger to her physical well being. Quite the contrary, in fact.

The man called Finn was stunning, in a totally not human way. Tall, lean and elegantly muscled, with aristocratic features, short mahogany-colored hair and unbelievably lovely eyes. He glimmered like starlight. The energy he generated was not an aura around him, but in him, under the skin.

The one he’d introduced as Val was a giant mass of golden muscle. The faded logo of a popular heavy metal band stretched across the broad expanse of his black t-shirt, and his snug black jeans clung to thighs the size of small tree trunks. He looked like he’d be more at home in leather and fur. With his shoulder-length dark blond hair and features that made him almost too good-looking, he reminded Meru of that movie star Sheridan was always going on about…only bigger.

He smiled at her, a surprisingly friendly, open grin, as if inviting her to laugh with him.

She looked at the tattoo of a hawk in flight bursting from his left biceps and watched it pulse with a life all its own. She couldn’t contain her gasp at the sight.

“What’s wrong?” The rich, gravelly voice had her thighs squeezing together, her body shivering in appreciation.

He had to be over six and a half feet in height, his shoulders so wide they nearly blocked out the bandstand behind him.

This man, dark and sinfully masculine, made her breath catch and other parts of her she was trying desperately to ignore clench and tighten with a sudden, astonishing desire. She’d never experienced anything like it. At least, not while she was awake.

He too was dressed all in black from head to toe, making her think a bit giddily that it must be the standard uniform for hot, hunky Others. He was a sight to make a grown woman weep.

And he looked oddly familiar.

She felt the rush of power, of untamed earthiness pulsing around him, reaching out to wrap around her. Everything about him made her logical mind scream “Danger!”, though her feminine instincts were dancing for joy as they continued to catalogue his lust-inducing features.

Thick hair the color of a raven’s wing fell carelessly forward over his brow and his brooding, sensual eyes were black and intense. They focused on her with unswerving intent.

Bob was a Greek god.

That was the only possible explanation. And he had to be a jerk, she thought hazily. No one could possibly look this good and be a nice guy to boot. Her instincts disagreed but she wasn’t completely convinced they were thinking any clearer than she was at the moment.

She felt his gaze as a physical caress and realized her body had been unconsciously leaning toward him, drawn by the magnetic pull. She unclenched her hands and reached up to fiddle with one of the small, carved heads of her mother’s torc. His eyes followed the movement and widened in surprise…and she knew.

Meru turned to glare at her cousin. “How did you meet these guys?”

Sheridan looked startled and tried to act affronted. “I told you! They’re—”

“They are not firemen. They are something else entirely.”

Sheridan stuttered out a nervous laugh. “Well, what do you think they are? Strippers or something?”

“No.” Meru rolled her eyes and stood a little unsteadily, pointing at each man in turn. “This guy is Fae.”

Kyle looked at Sheridan in confusion. “He said his name was Finn.”

Meru sighed heavily. “His name is Finn, Kyle, but he is a Fae. As in Fae folk? Faeries? Ringing any bells?”

Finn’s lavender eyes went impossibly wide only to narrow dangerously when Sheridan muttered, “Well, I did say he was a pretty boy.”

Meru turned to Damon. “Bob here, who by the way in no way, shape, or form looks like a Bob. Not that I have anything against that name, mind you.” Meru realized she was babbling.

Val swore under his breath, but Bob’s dark eyes latched onto hers and twinkled.