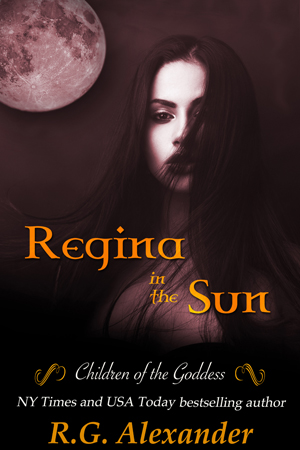 There’s only one place left to run-into forbidden arms.

In Book 1 of the Children of the Goddess series, Regina, an Unborn and the last of the Readers, finds solace and aid in an unlikely place…and introduces readers to a whole new world.

She walked towards the dance floor, a bit delirious from exhaustion and heedless of the surprised murmurs, and began to sway to the poignant melody.

In her mind’s eye she was young again, free of pain as her grandmother taught her how to story-dance. That’s what she’d always called it. Daj Mia believed that every dance should tell a story.

Her hands rose above her head. Wrists and hips rolled smoothly as she twirled to the slow, sad ballad.

The song told of a girl who didn’t seem to fit in the world. Lost in darkness and pain, the only freedom—only happiness she knew—was in the sun.

The irony of the lyrics weren’t lost on Reggie. She was a Vampire, after all. And yet, it was nothing but the truth. The last true memories she had of love and laughter were brilliant with the light of day.

As the words wove around her, she could almost believe she was dancing in the sun, could feel it on her face. Centuries of darkness were erased in a heartbeat. Lost in the magic of the song, she could feel the dew-filled grass beneath her thinly covered feet instead of the hard wood of the pub floor. It was her family’s laughing eyes, shining with support and approval, gazing at her as she swayed instead of the cold judgment of the strangers who watched her every move.

The waif-like creature danced as if she were in another world. He realized she didn’t comprehend the effect she was having on her paralyzed audience. Several of his clientele stood, their intentions clear. They planned to remove the unwanted element from their midst, but something about the solitary dancer froze them in their tracks. A sadness they all recognized, a yearning some of them had never known and a sexuality that held them captive.

He couldn’t tear his gaze away as her belly rolled and she arched her back, the movements beyond graceful, unknowingly sensual. Her hips jutted sharply left and right, body undulating like water.

The air left his lungs, desire racing through his limbs, weighing them down. Her waist-length blue-black tresses swept the floor as her neck rolled forward. She reached up once more, her face glowing with some inner light as she embraced a vision only she could see.

The beauty fell to her knees, back lowering until it touched the floor as the final words to the song echoed through the silent room.

It was then that he noticed her haggard appearance. The torn clothing, the scrapes covering her arms and the extreme pallor of her skin made his gut clench.

A tear fell unchecked down her cheek. He tensed as if to go to her, but his brother rushed past him to her side. Lux picked the girl up as if she were light as a feather and whispered softly in her ear. He joined them in time to hear the low, sultry voice tremble in response.

“Elizab-eth said… Sanctu—” She passed out before she could finish the sentence.

Lux looked up at him in surprise before holding the girl protectively closer.

The murmurs had picked up around them. He and his brother looked over the crowd, sensing the growing agitation. Those who had stood before seemed to have shaken themselves out of their hypnotic stupor, stepping forward as if to protest. Zander moved closer to his brother and the unconscious girl in his arms. “It’s the law. Sanctuary has been requested and cannot be refused.”

Half the crowd nodded, intimidated by the large proprietor and still moved by the scene they’d just witnessed. The rest of them Zander ignored. Directing Lux towards his rooms and instructing the remaining employees to keep alert, he quickly followed the pair upstairs.

His curiosity, his protective instincts, and something he wasn’t quite ready to name were all in overdrive as he thought of the beautiful, mysterious stranger in his brother’s arms. Who was she? And why did he have the feeling his life would never be the same?

Zander Sariel looked down at Lux. His younger brother sighed and ran his hands through his shoulder-length burgundy hair. “From what she said and the traces I’m sensing, I assume she’s one of Elizabeth’s. A member of the Deva Clan.”

Zander felt his face twisting in a tired grimace as he realized what Lux was saying. Not just any Unborn, his little sleeping beauty belonged to Liz, the widow of one of his dearest friends, and a long-time pain in his ass.

How many Truebloods had complained over the years about her growing clan of “dangerous” Unborns?

That his people were a little pompous and paranoid was the understatement of the millennium. He didn’t share their opinions, but since taking his father’s place as glorified diplomat and Mediator a few hundred years before, he had to listen with objectivity. Regardless of his own beliefs.

Zander knew Elizabeth well. Lux had helped her sire and husband, Malcolm, keep her hidden during their marriage. Zander had even helped his younger brother get her out of harm’s way with enough funds to last her several lifetimes after the tragedy of his old friend’s untimely death. He’d owed that to Malcolm.

But he couldn’t ignore how Liz and her rash acts of vengeance and regular creation of new Unborns had affected the balance of his community. And now one of her “children” was lying on his bed, obviously wounded and publicly asking for help.

“I’ll take full responsibility for her.” He heard Lux state quietly as he looked down at the fragile creature.

She seemed so helpless, ethereal as a dream. Exactly the type the softhearted Lux had always felt compelled to protect. He placed a strong hand on Lux’s shoulder, drawing his brother’s gaze.

“She’s mine.” He was startled by the sound of his own voice. “I mean—my responsibility. She asked for sanctuary. It’s mine to give.”

Regina in the Sun is a true treasure that weaves a sensual spell that will touch deep within reader's hearts.

Regina in the Sun is a wonderful twist on the vampire myth and R.G. Alexander is a born storyteller. Ms. Alexander pulls such emotion out of me with just a few words that I can go from joyously happy to heart wrenchingly sad in a matter of minutes. Regina in the Sun has such heart that I can feel the words pulsing with every beat.