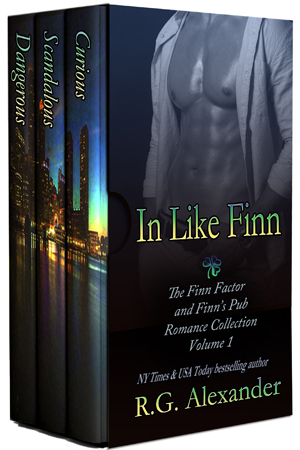 Jeremy Porter is. Though the bisexual comic book artist has known Owen Finn for most of his life—long enough to know that he is terminally straight—he can’t help but imagine what things would be like if he weren’t.

Owen is far from vanilla—as a dominant in the local fetish community, he sees as much action as Jeremy does. Lately even more.

Since Jeremy isn’t into collars and Owen isn’t into men, it seems like his fantasies will remain just that forever…until one night when Owen gets curious.

Warning: Contains explicit m/m nookie. A lot of it. Very detailed. Two men getting kinky, talking dirty and doing the horizontal mambo. Are you reading this? Do you see them on the cover? Guy parts will touch. You have been warned.

Will it be Scandalous?

If Natasha Rivera is involved, the answer is usually yes. The owner of The Twisted Tart bakery has never been shy about expressing her opinions or her desires. The only secret she ever kept had to do with her feelings for a certain Finn and the details of their unusual relationship.

When reformed bad boy Senator Stephen Finn asks Natasha to join him for a week of political intrigue and kink, there’s no way she can say no. Nothing has changed. His star is still on the rise and she is still too wild to be tamed. Once they get their hands on each other they’re bound to cause a scandal…but it might just be worth it.

Recipe of Warning: Take one outspoken, sexually confident woman and a repressed former bad boy. Combine until sparks fly. Add voyeurism, exhibitionism, spanking, excessive quantities of explicit sex, a kinky house party and whatever pervertible you have on hand…thoroughly shake the mixture until your wrists hurt or your batteries run low. Mmmm. Yummy warning.

Brady Finn has been a cop and a Marine, but he’s never been in a situation as dangerous as this one. Waking up naked in the bed of a man he’s wanted for months—with no memory of how he got there—was only the beginning.

Rope Dom Ken Tanaka knows kink isn’t Brady’s scene, but he still can’t resist the tall, redheaded Boy Scout. When their search for a missing person requires Brady to go above and beyond the call of duty, they’ll both do what needs to be done for the mission—and give in to the undeniable passion between them.

Will their explosive chemistry last once the job is over? Or will taking that chance be more dangerous than either man is willing to risk?

Warning: Explicit male/male sexy times. Voyeurism with a touch of noncon, role playing, rope. And, once again, very serious about the graphic gay sex. I’m not sure why you don’t believe me… Also? An Evil League of Evil! Good kink vs scary villain kink (you’ve been warned), Finn Club rules and the aftereffects of The Great Rumming of 2015. I SAID RUMMING. Dirty minds.