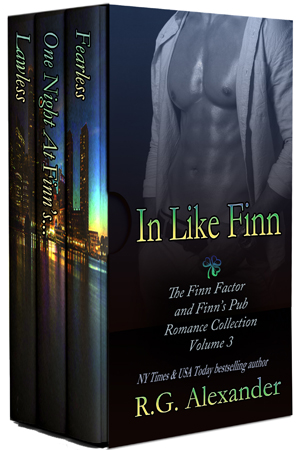 Can you be Fearless?

Rory Finn used to have a sinful reputation and a fetish for a certain kind of man–the straighter the better. But since the Mistletoe Meltdown, he’s turned over a new leaf…just in time for his two best friends to start breaking one of the few rules they had–with each other.

The past haunts him, but if he can find the courage to trust them with his heart, and his secrets, he can have the kind of love he’s always needed…from the two people he’s always craved.

Warning: This book has male/male/male nookie. (Gay for you, Pan for you, Bi for you, Try for you.) That’s right, three sexy guys, nerdy references, vampire love triangle obsessions and a game of X-rated trivia that everybody wins. I won’t bother listing all the things they do to each other. If you’ve read the warning to this point and you know the Finn Factor series at all? You can probably guess. *some sensitive elements-past trauma*

One Night at Finn’s

Ever been on a bad date? Hold my beer…

I’m not saying I’m looking for perfection, but is hot, sweaty sex with a genuinely decent guy too much to ask?

When I meet the much older and newly retired Master Sergeant Carter Willis, he definitely fits my criteria. But after he rescues me from the worst of my dating mistakes, I can’t tell if he’s watching my back to protect it, or because he likes what he sees.

Giving romance tips to strangers is easy. This feeling I get when Carter is around is making life complicated. It feels like a thing. A forever type thing.

And if there’s one thing that scares me more than my accidental abstinence becoming a permanent condition… It’s trusting in forever.

Chief Solomon Finn needed a change. After leaving the force to help his family and think about his future, it doesn’t take him long to figure out what it is that he’s been missing.

Keeping the peace while burying his deepest desires had sent the one man he wanted running in the other direction. No more.

Everyone else in his damn family had found their happy ending… It was time he did the same.

Warning: Gay men in love and getting busy. Shower attacks. An overabundance of Finnterventions and dinner arguments about Nora Roberts. Did I mention all that gay sex? Don’t read this if you don’t like gay sex. Or spankings and handcuffs and men having sex…with each other. Just trust me on this one.