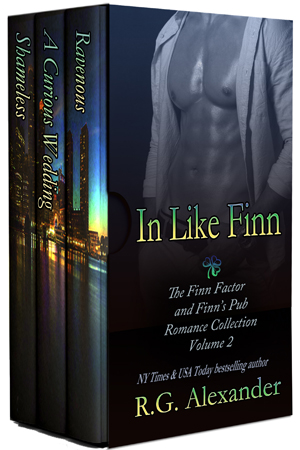 Is it wrong to be this Ravenous?

When Jennifer Finn was good, she was very very good, and when she was bad…she got arrested for assault and indecent exposure. Now Jen’s back in school and determined to find her balance. But one man seems just as determined to destroy her equilibrium, and he knows all the right buttons to push.

What began as a favor for an old friend became something more the instant Trick Dunham laid eyes on Jen. Now he can’t resist inserting himself into her life, despite warnings from her family. Little Finn might be struggling to find her path but Trick knows exactly where she belongs. What she needs. He just has to get her and their third to agree.

Professor Declan Kelley has a weakness for his old lover, Trick. The bad boy ex-con has become a wickedly sensual man who comes whenever he pleases, but never stays. When he shows up again it’s to offer Declan one of his darkest desires to date—Jennifer Finn and Trick together on a three-way platter. But that would threaten the safe, uncomplicated life he’s built for himself, and Declan’s not doing that for anything.

Warning: This book is a Jenga tower of sin. Explicit, graphic, shocking, teetering-on-the-edge-of-unbalanced, unapologetic sin. M/m, m/f, f watching m/m together and liking it so much that m grabs f and makes her a part of the dirtiest m/m/f ménage in history. That’s right, I said it. Role play—the hot-for-teacher kind, the sexy-thief-in-the-night kind AND…well sometimes you just have to ignore the warnings and dive right in.

Revisit the Finn Family as they prepare for Christmas Eve and the Curious Wedding of Owen Finn and Jeremy Porter. From bachelor parties with penis cakes to proposals and new revelations, the family has one heck of a holiday season. Are you Team Owen or Team Jeremy? Whatever side of the aisle you’re sitting on, you’ll finally get to see the wedding we’ve all been waiting for.

Warning: This holiday feel good is full of nookie. m/m, m/m/f, m/m again…and some more m/m (you’ve read the series right? Then you know how they are.)

Who knew he’d be so Shameless?

Seamus Finn is a bar owner, a single father of four and the center of the Finn family… And he hasn’t been with anyone since his twins were born. An all-expense paid trip to Ireland for a firsthand lesson in brewing beer turns into a different kind of holiday as Seamus rediscovers things about himself—and his sexuality—that don’t fit into the carefully controlled balancing act his life has become.

Giving in to a fling is one thing, but when risk-taking, over-the-top billionaire Bellamy Demir follows him home and meets the family things may get crazy…